I have been a good girl since my last post, but I am disappointed not to have seen a reduction on the scale yet. I am still 205. I would be happy with 204! Oh, well. Don't worry, I'm not even close to thinking about "throwing my hands up and giving up" or nothing - it's only been a few days. And I've been barely moving all week. But yesterday I got up and pounded out 50 minutes of walking on a disc golf course, so I guess I hoped a little bit that that would show me something less than 205 today.

On the positive front, I have looked at my schedule for the coming months and work looks light. Considering I want money this is not good. But considering I want plenty of time and and even keel to focus on my weight loss, this is good. One difference, though, between this summer and last summer is that this summer there are possibly more friends to make social demands on my time. That was a burden I didn't have last summer.

Hi. It's been a while. I'm not even going to check and see how long it's been since I've even signed in to blogger. I hope everyone is having excellent success with their missions. I made it through my intense work period and am gradually (very gradually) getting back into the swing of things. I started back on the meal plan a couple days ago (this is day 3) and am doing well. I have veered from the plan but stayed in control. Feelings of withdrawal and restriction gave way to a familiar sense of moderation and satisfaction with less. Instead of going into the kitchen and grabbing up a full bowl of cereal and wildly piecing together a fast breakfast, I'm enjoying measured and sensible oatmeal and turkey bacon. When I'm caught with "my pants down" so to speak, I make considered and sensible substitutions to the meal plan. Keep meaning to return to exercise but haven't yet - too much time with my laptop is mostly responsible for that, just not clicking the little X in the top right corner. I haven't been weighing myself much over the past few weeks but I have seen weights as high as 209. After one day on the diet, water weight must have come off and now I am 205. That's really impressive, actually, not much of an increase at all, when you consider how I've been living. Now it seems I am back on plan, so that's also encouraging, that I can bring myself back when I've gone over the edge. I actually began to get worried about that. I physiologically changed inside. I forgot what eating well looked and felt like. My eating whims changed. I ate at restaurants. That could be nice sometimes, but not exclusively. I was back to the way I was before I started this plan. I can't explain it.

I went shopping last night on a whim. I was so excited about my size 16 gorgeous mini dress (I think I took a picture - I'll try to post it) that I wore to the Opera the other day, and the other dresses I tried on that had looked so good. Well last night, the clothes were crappy and they looked bad on me and I didn't feel at all good about my appearance. I really want to get into an exercise routine now, too, to improve as well as I can my flabby sack of skin! 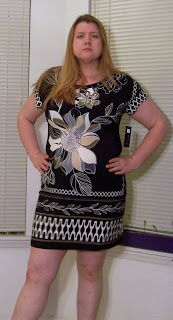 Four weeks was going to be so easy - ha!! I thoroughly underestimated the combined power of the Extremely Intense Work Week and the Big Menses. Everything went to hell. It was as if I've never been dieting at all. It's been really hard and really intense - I really took on too much and I'm still trying to catch my body and peace of mind up. The suffering is almost over and I can start my 4-week strict adherence again soon. I think that by now, sticking to the diet might actually feel restrictive again. I'd better to learn to love it soon. I have a little time tonight to relax and I want to read and watch a Buffy episode (I'm trying to watch the series while it's free on hulu - I know so many people who love it and I never watched it.)

When I have anything to report, I'll let you know. I still want to get down to 198, but I'm definitely further from it now than I was. I also need to regain control of my appetite - it feels like I need to relearn what I knew so recently. Here's hoping I'm not overconfident about my ability to hop back on the wagon!!

Oh, by the way - my hair that fell out last year has started growing back in - it's so shaggy around my scalp I look horrible. Oh, well!
Posted by Hallie at 8:56 PM 4 comments:

Day 2 was a bust, but it was beyond my control

Well, day 2 was beyond my control. I left the house at 11pm last night hoping to get home in a few hours. Instead, I wasn't able to go home at all before having to be at work all day starting at 8am this morning. I wasn't able to get home and get to my food, or even shower or sleep. I spent the whole day hiding my grody self under this shawl I had in my car. Anyway, if it hadn't been for that, I'm confident I could have stuck to it again today like I did yesterday. I probably ate too much today, but tomorrow I'm back on to finish out the 4 weeks! Ok.
Posted by Hallie at 10:51 PM 1 comment:

You know when I started losing weight, and when I started this blog, I not only weighed myself every day, but I recorded it every day. It was so much fun losing weight then. I lost weight on a steady stream from March to about October, and then things slowed down. Whether life was getting in the way or I was intentionally slowing down, or I was as I have been the past several weeks - still dieting, but then having allowances that would interfere with weight loss progress - a restaurant meal, a few too many chocolate minis, an all-out binge. It used to be that when my roommate would have parties, I would dutifully eat my planned food no matter how weird it seemed. Friday she hosted a baby shower and I ate the chicken-cheese dip that was prepared, and then had some cake. "Why not?" And a lot of "Why not?" and "What the hell?" gets said. And it's been okay. Even though it seems to be taking me forever to bounce down to my goal of being under 200 pounds, I've already lost a lot of weight and I'm a size 16 and things are "pretty good" and, as I previously blogged, I've been satisfied. I took a beach trip for a few days and though I packed two days worth of food, I still had several traditional beach joys - tiki bar, fried captain's platter, ice cream sundae... So I haven't been as goal-minded lately.

Saturday was weigh-in day, and grocery day. I was very concientious that I had to buy groceries that day because I had a heavy week of work ahead of me and didn't have time to deal with it after. I got my laundry done and my groceries shopped for in preparation for my intense week of long hours and stress.

And at some point during the day I decided I wanted to engage in a couple of "special treats" - crepes at the Original Pancake House and also try this Ethiopian/Eritrean restaurant that I'd long been wanting to try out. And then on Sunday - today - I would begin 4 solid weeks of austere adherence to the meal plan. 4 solid weeks of "No Exceptions." No chocolate (except the sugar-free chocolate pudding or whatever might be on the meal plan), no goodies. Just the same as I was in the beginning - all my food is provided for on the meal plan, so there should be no need to cheat - if I feel an urge I can say "You don't need/want that - you're already taken care of."

It is, of course, my intention to stick to this 4-week pledge. It is also my hope that, at 1400-1500 calories per day, at the end of 4 weeks of strict adherence, I will push under 200 and reach that ever-loving goal of 198. I started today and so far, so good. I mean - obviously I started last night when I stayed up so late cooking and preparing and packing meals for the next day or few. But today I'm adhering to the eating part, and I had a pretty good test moment to help me define my devotion to this (and devotion is a very relevant word in this matter) - At work, there were Krispy Kreme doughnuts provided for the crew at break time. I LOVE KRISPY KREME DOUGHNUTS! And last week I would have said "Why not?" or "What power have I against this tide?" and had a couple like everyone else on the crew did. But I ignored the doughnuts and had nary a one. Pretty good for a first day. I still have to go do an untold number of hours of work so I ate most of my dinner, but left the bin of cantaloupe to eat later if I begin to feel noshy or weak.

Now, on to another topic.

To me it seems like I lost lots of weight last year and this year only a little, so slow, and not so much recently. So it's a bit perplexing to me that suddenly NOW I'm being barraged with comments and have to deal with them. "You're looking good," from people who know I've lost weight. "Skinny," from Brenda who hasn't seen me much in months. "Allright, what's your secret?" from Jerry. And then there's a lot of these which confuse me, too -> "Do you look different? Have you lost some weight?" I mean, I remember in November and December that one security guard was marveling that I was wasting away, and that made more sense to me to hear that then. But now, after having lost 80 pounds, to have some people saying "Do you look different? Have you lost a little weight?"

I've just had so many comments in the past 3 days or so that you might think I'd just dropped 40 pounds, instead of basically sitting at 205 give or take for weeks the way I have. To have a guy who's seen me pretty regularly for the past several months say to me the other day "Your diet's really working" NOW when I don't feel like I'm losing weight...

Well, it's interesting, but there's no way for me to comprehend it so I'm not going to try.