I finally found this blurb on this page:

"Weight loss. Even people losing weight in a physician-monitored program can experience some hair loss 3 to 6 months after losing more than 15 pounds. This hair loss is common, and hair growth does return to normal."

Apparently there is a 3-6 month delay in this hair loss thing. It happens with pregnancy, stress, and eating disorders. Now when I started this diet I was going through a stress thing, too, with all the meal-prep, working, and getting little bits of sleep here and therel Now I haven't been losing weight too fast, and I have been eating healthy. However, I'm going to start taking a multivitamin even though I think the damage is already done. Apparently there's nothing for it now but to wait, about a month for the hair to re-enter the growth phase, and then about 3 months for the hair to grow back in.

While waiting for the hair to regrow, I should probably take this thin hair opportunity to get a perm or at least curl my hair a few times, and do the kinds of styling things that having a ton of heavy hair makes difficult.

Below - someone else had the same thing happen, and many others weigh in on what did or did not cause them to lose weight.

Now, last night was a big awards ceremony here in town, and I also had two jobs earlier in the day. I ate my breakfast. I skipped snack and ate lunch. Then I had just the two egg whites of my second snack. I was cutting down because I thought there would be food and drink involved in the festivities. And there was, but not to the point of gluttonous abandon. I had some roast beef on a roll, and 4 Jack & Diet Cokes, a small portion of cheesy pasta, and a small portion of spinach artichoke dip on 4 little pieces of toast. I did talk about going to Waffle House, but no one else seemed really up for it, and I wasn't really hungry. It really wasn't the food I was wanting, it was the late-night after-party after-drunk camaraderie. Otherwise I was proud of myself, silently, for maintaining moderation last night, especially because it felt natural, not like I was forcing myself to do it.

I got many compliments on my appearance. I wear jeans most every day and at work I'm usually dressed casually, to get dirty, so whenever I dress up, there are always many people who compliment me just because they didn't know I could dress all feminine and wear makeup. So a lot of it was probably that, though my weight was mentioned once. Also, I won two awards and my roommate snapped a picture! So here I am, below, feeling very awkward just standing on stage for everyone to look at. I'm in the middle. 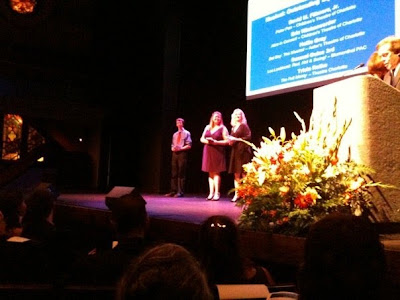 Interesting about the shedding hair. I have noticed I have more single strands falling out, and I notice it in the bathroom where I brush my hair. It doesn't come out in clumps, though. I may notice it more because I dyed my hair and did a boo-boo and got too dark of a dye, so I'm seeing the almost black hairs more easily.

I agree to take a multi-vitamin. I've read about this happening to others. Oh, the strange things that happen to our bodies, huh!

Yes, it's not so much clumps but it can be 15-20 strands at a time every time I pull at my hair. It's definitely more than usual, though it took me a while to be sure of it. The "clump" from the shower last night was just really a lot of hairs and for some reason they were kind of knotted together making them seem more clump like. It was a little alarming.

Diane, Fit to the Finish said...

You look very lovely in the pictures!

I had some hair loss as I was dropping my 150 pounds. The doc told me it was completely normal and not to freak out. I was eating healthier than I ever had before so it wasn't a nutrient thing!

Don't worry about it - it will stop soon enough.