These are a couple of breakfasts.

Yesterday was a potato, ham and green pepper hash with berries (since I was out of grapefruit - it was supposed to be half a grapefruit) with soy milk and diet Dr. Pepper.

This morning it's 2/3 cup part-skim ricotta cheese (the recipe called for fat-free but they didn't have it at the grocery store) with raspberries, whole wheat toast, and skim milk. I did the count on it - 480 calories. I wonder how much difference it would have made to have had fat free ricotta instead of part-skim. 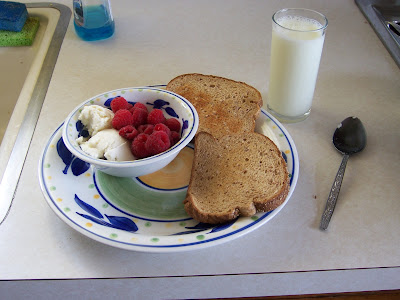 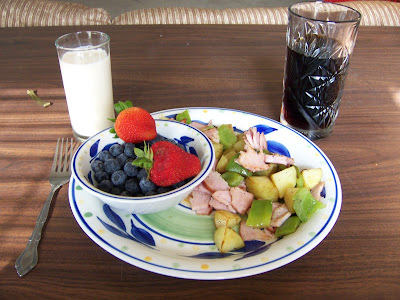 Great meal ideas! Another great place to save calories is on the bread. You can either do Nature's Own Double Fiber, but I'm a big fan of Arnold's Sandwich Thins. Absolutely delicious and both pieces of bread total 100 calories with 6 grams of fiber!

I hope to overcome some of my hunger issues, and be able to eat smaller amounts of richer stuff, but for now... volume.